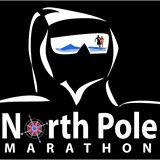 The North Pole Marathon 2014 on BBC 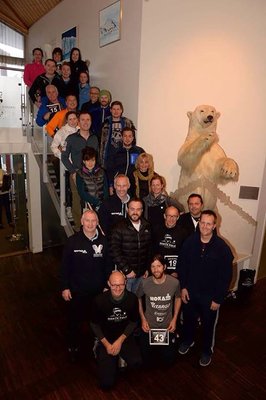 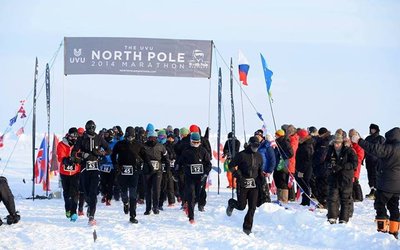 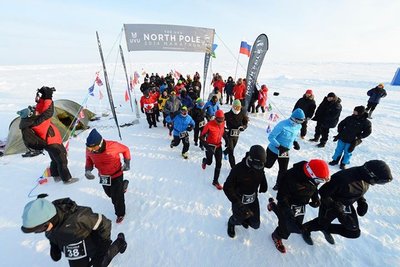 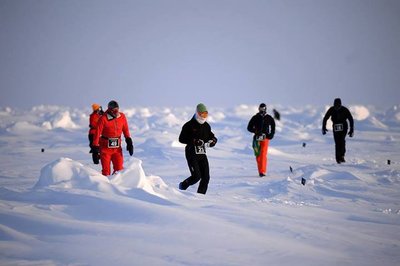 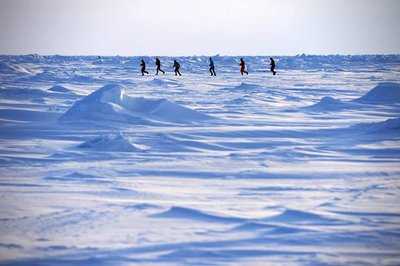 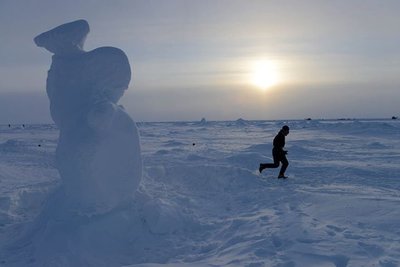 Impressions from the ice. 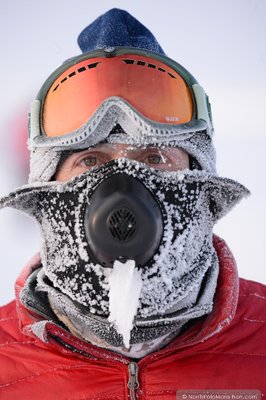 Breathing, sweating and minus 30 °C is a difficult combination. 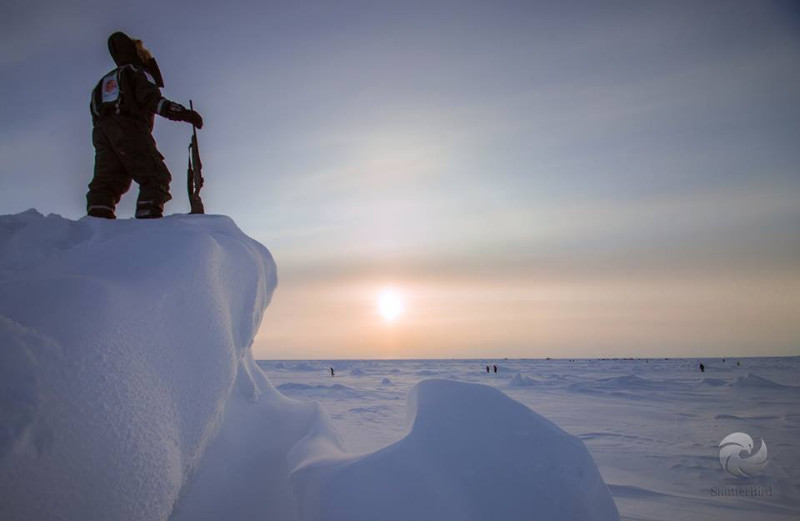 3 guards against ice bears. A female bear with 2 cubs had been spotted in the vicinity. 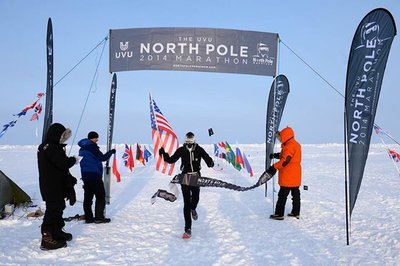 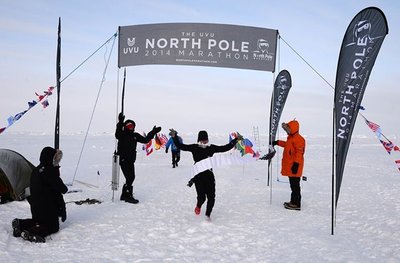 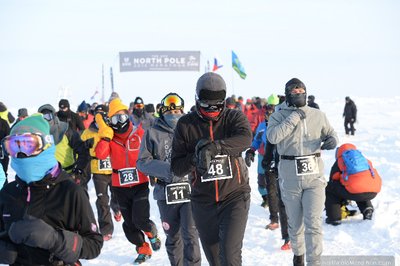 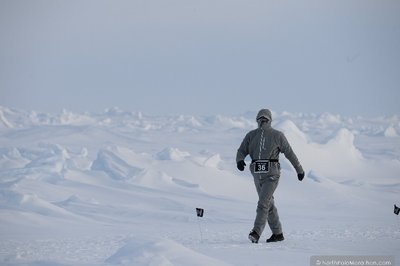 … somewhere in the middle of nowhere … 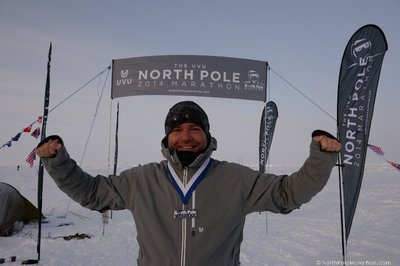 … and at the finish line of the half-marathon after 6h11min. Having done my last running twenty years ago (Los Angeles Marathon and Istanbul half-marathon) I now feel like a hero 🙂 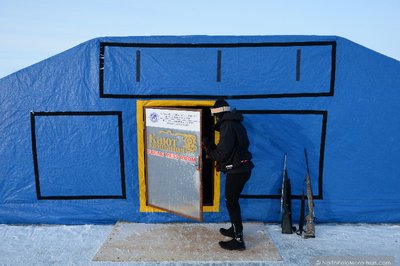 I spent more than 90 minutes of the race warming up in the tent and changing wet & frozen under-clothing. 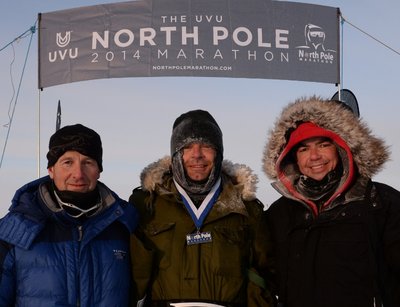 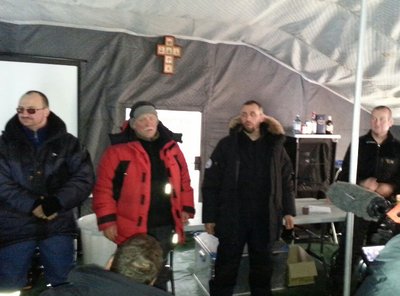 In the main tent with the three Russian camp leaders and the legendary Richard Donovan (far right; own foto) 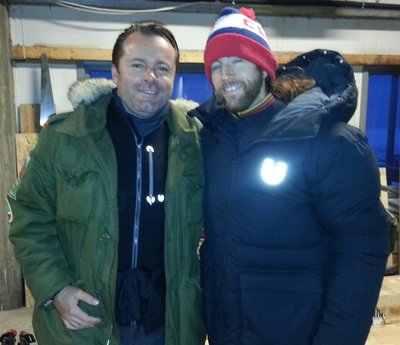 Mike Wardian (USA) and Anne-Marie Flammersfeld (GER) have won the 2014 UVU North Pole Marathon. The German athlete won the women’s title in an event record time of 4.52.45 despite possibly the slowest conditions in the 12 year history of the race.

Forty-eight athletes from 16 countries lined up at 10:15 GMT on 9th April for what is known as the ‘world’s coolest marathon’. The race location, on the drifting ice floes of the Geographic North Pole, can attract hungry polar bears and this resulted in armed guards being on hand to patrol the marathon route. A temperature of -30C that dipped even lower with the wind chill, and a course of snow that refused to compact but instead deteriorated, meant a genuine Arctic challenge was in store for the participants.

Wardian, the four-time USA 50K Champion and world 100K silver medalist, took the lead from the outset. Running on a 3.52km circuit designed to avoid leads (breaks in the ice) and to minimise the risk of polar bear attack, his advantage was never threatened during the 12 loops necessary to complete the standard 42.195 km (26.2 mile) marathon distance. The second placed man was Luke Wigman (GBR) while surprise of the day was perhaps two athletes from tropical Tahiti, Patrick Cande and Bruno Ercoli, who finished third and fourth, respectively. Wardian, a three-time US Olympic Marathon Trials runner, will next join the elite field at the Boston Marathon on 21st April. He described the North Pole Marathon as the toughest marathon he has ever run.

However, the star performance of this year’s North Pole Marathon could well be awarded to Anne-Marie Flammersfeld. The Sports Scientist, based in St Moritz, Switzerland, set a new women’s record of 4.52.45 despite the feezing temperatures and energy-sapping underfoot conditions. Her time was marginally faster than Fiona Oakes record that was set last year, with Oakes holding a 2:38 hrs marathon PB in normal condiions. Anna Wester (NED) and Shona Thomson (GBR) finishedsecond and third, respectively.

The race attracted a range of runners from military personnel to vastly experienced marathon and ultramarathon runners to charity runners to people making their marathon debut at the top of the world. Of the total race field, six male athletes and three females elected to complete a half marathon. One paticipant was forced to withdraw from the marathon on doctor’s advice due to moderate hypothermia.

Further information about the event:

–
All fotos, except where otherwise noted: Copyright Mike King / NorthPoleMarathon.com
–