The Colombian mountain territory of Marquetalia was declared an autonomous republic by the “Fuerzas Armadas Revolucionarias de Colombia”, or FARC, in 1948. FARC co-founder Jacobo Arenas (pictured right), surviving the government invasion of Marquetalia, wrote a book called “Diario de la resistencia de Marquetalia” (“Marquetalia Diary”) in 1972. FARC founder Manuel Marulanda “Tirofijo” is pictured in the center. One of only two surviving founders of FARC, “Sergeant” Miguel Angel Pascuas aka “Black Death”, can be seen on the left on my foto, sitting in front of his tent, at age 79!

There haven’t been any foreign tourists for almost 60 years. The Republic of Marquetalia still has a mythical touch for the Colombian “freedom fighters”, who became infamous worldwide because of their hostage abductions and killings, but who are now accepted as a political party within the peace & reconciliation process in Colombia (after the Havana Declaration in 2016). FARC are estimated to be responsible for ca. 20% of the 450.000 deaths in the Colombian Conflict and are still legally considered a terrorist organisation by most of the Western world.

As a Libertarian economist I have zero sympathy for their Marxist-Leninist views, but I understand the need for a better representation of the indigenous Colombian peoples versus the various foreign Conquistadores. In any case, all parties in this conflict are just pawns in the game for higher geo-strategic goals by the West, mainly control over the Panama Canal, for which Colombia was divided by the US through the Varilla Treason into two countries with the connecting roads purposely abandoned in the Darien Gap. (Read Murray Rothbard: The Panama Canal Caper who names J.P. Morgan, Perkins, Cromwell, the Rockefellers, Paul Warburg and Jacob Schiff of Kuhn-Loeb. Also read Richard Oglesby Marsh: The White Indians of Darien. It is safe to say that the same group who putsched up Panama/Columbia then ignited the Thule & Swastika Revolutions against the Kunas in San Blas, and – with more effect – against the Germans.)

“The US intent to influence the area, especially the Panama Canal’s construction and control, led to the separation of Panama from Colombia in 1903 and its establishment as a nation.” Wikipedia Panama

Later the divided Colombians served as proxies in the Cold War, and now for the so-called “War on Drugs”, which is essentially just a covert operation FOR the secret peddling of drugs (not AGAINST it), in order to finance illegitimate Western government activities, from foreign regime changes, to reptile funds for political corruption, to local “strategy of tension” warfare, to police state surveillance, to enriching US oligarchs and family clans, to filling & running profitable private prisons in the USSA, and so on.

Anyhow, nowadays the FARC are renamed “Fuerza Alternativa Revolucionaria del Comun” and enjoy the status of a political party. Picture with FARC leader and book author Martin Cruz Vega, formerly known as “Rubin Morro” and responsible for laying down the FARC arsenal of military arms to the UN, next to him our trip organiser Jack Goldstein, and my “Danger Zone” buddy Thorsten Salaske (left to right).

The trip was part of the ETIC “Peace Road to Marquetalia”, protected by the Head of the United Nations Verification Mission, Carlos Ruiz Massieu, and made possible by my well-connected Colombian friend Jack Goldstein who runs the Lancaster House Hotel in Bogota.

The location of the former “Independent Republics” of Colombia. Marquetalia is a 10 hour asphalt drive south-west from Colombia’s capital Bogota, then 2 hours by 4×4, followed by a 6.5 km steep mountain trek.  Map Source

Trooper giving the traditional thumbs up that the road is cleared of FARC 😉 Our road escort was a beautiful cooperation of FARC, the Military and the Police, now working peacefully together.

Thanks to Bataillons 18 and 19 for securing the area. Apparently there were fights only 20 to 30 km away.

The Police were equally friendly to us, accepting to be fotographed, and open for a chat (here a Commander of GAULA, the Special Forces against Kidnapping and Extortion)

Entering the scenic Tolima Department where Marquetalia is located

We drove deep into the night, here through Planadas

“Marquetalia – cuna de la resistencia – source of the resistance”. Wake up call next morning in El Oso, the small government supported center for the former FARC fighters. This little village will be developed as a tourist destination. No hotels yet. Slept in a tent.

“Nuestro camino es la revolucion … no otro. Our way is the revolution … no other”

The spirit of a revolution which will hopefully only ever stick on murals.

Enjoying some of the best cigars & scenery in our life

On mud roads up to the village of Villanueva

Small reminder why I go by the name “Gentleman Adventurer” 😉

Hiking in steep and slippery conditions, up and down and up again, to Marquetalia

Always protected by the friendly Bataillon 18

With their fierce fighting dogs

Plus UN team leader Enrique Sanchez with his drone

Through the most beautiful landscapes

Until we reached the hidden mountain plateau of Marquetalia, the founding place of FARC

And looked after us with excellent food

Around a campfire where rebel stories where shared

Such as the FARC’s shooting down of two government helicopters,

Apparently beautiful rebel girls were a motivating factor for some FARC fighters – and vice versa (Tanja pictured on the right; Sandy on the left is a famous Travel TV presenter from Panama however)

The charismatic Tanja Nijmeijer, Dutch national, is the most visible foreign face of FARC, part of the Havana negotiation team (she resigned from FARC the day after our visit). Not to be confused with Che Guevara’s Tanja.

The Dutch documentary “Dichter bij Tanja – Closing in on Tanja” (2010), a search for Tanja led by her Dutch “opponent” Liduine Zumpolle, from the NGO “Hands for Peace”.

Miguel Angel Pascuas, aka “Sergeant Pascuas”, aka “Black Death”, one of the two remaining original founders of FARC, was also full of joy to be able to access Marquetalia for the first time in more than 50 years.

With Martin Cruz Vega, aka “Rubin Morro”, FARC commander and sole person in charge of turning in FARC´s arsenal over to UN

Our trip received quite a bit of local media attention

For example by the United Nations: El Turismo de Aventura llega a Marquetalia

One of the best film scenes ever (at 16:36), when FARC Senator Sandino answers that the best political system is “Socialism” then she cries “Hey this is MY plastic bag!”😉

For example in Doug Casey’s International Man: “What the FARC?”

And for an upcoming documentary movie: the “Danger Zone” team (Per Besson, Thorsten Salaske, Kolja Spöri) is happy to have contributed to the “Peace Road to Marquetalia”.

The two best known books about FARC hostages, who were freed in Operation Jacque, after several years in captivity: 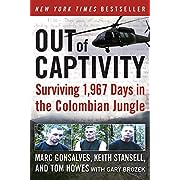 Ingrid Betancourt: Even Silence has an End 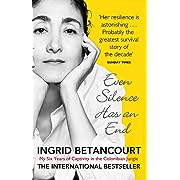 “In their book titled Out of Captivity, American Northrop Grumman contractors Marc Gonsalves, Keith Stansell, and Thomas Howes, all of whom spent time as hostages with Betancourt, described her behavior while a captive of FARC as selfish, as was her belief she deserved better treatment than the other captives due to her political and social standing. The Americans, held captive by the FARC from 2003 to 2008, stated that throughout their captivity Betancourt claimed and took more than her fair share of scarce food, clothing, and personal space.[73] Stansell said, “I can get over just about anything, but I don’t know about Ingrid. Forgive? Yes. Move on? Yes. Respect? No.” Marc Gonsalves has defended Betancourt, and stated: “For me she is a courageous person, she behaved like only heroes do, this is why I am so hurt with Keith’s attacks.” Source: Wikipedia

The politically most interesting trip in my life. Thanks to the friendly people of Colombia – on all sides – and in particular Jack Goldstein and Martin Cruz Vega!!!

3 thoughts on “Hosted in the FARC mountains: Marquetalia, Colombia”