“It has always been the prerogative of children and half-wits to point out that the emperor has no clothes. But the half-wit remains a half-wit, and the emperor remains an emperor.” Neil Gaiman, Sandman Peter Scholl-Latour (born March 9, 1924, in Bochum, Germany) is a Franco-German journalist and publicist.

In 1945 and 1946 Scholl-Latour was a member the Commando Parachutiste Ponchardier, a unit of French paratroopers, with whom he fought in the First Indochina War.

After taking a master’s degree at Institut d’études politiques de Paris and subsequently completing his doctoral studies at the Sorbonne, he gained another master’s in Arab and Islamic studies at the Lebanese University of Beirut. He has worked as a journalist since 1950, spending many years as a correspondent in Africa and Indochina, as a studio manager in Paris, as television director of WDR, and editor-in-chief of Stern.

In 1973 he and his team were prisoners of the Viet Cong for one week.

Scholl-Latour was appointed as honorary professor by the Ruhr University Bochum in 1999.

Among his most successful books are the best-sellers Der Tod im Reisfeld [Death in the Rice-fields] (1980), Allah ist mit den Standhaften [Allah is with the Steadfast] (1983), Mord am grossen Fluss [Murder by the Great River] (1986), Mit Frankreich leben [Living with France] (1988), Der Wahn vom Himmlischen Frieden [The Delusion of Heavenly Peace] (1990), Das Schwert des Islam [The Sword of Islam] (1990), Den Gottlosen die Hölle [Hell to the Godless] (1991), Unter Kreuz und Knute [Under cross and knout] (1992), Eine Welt in Auflösung [A world in dissolution] (1993), Im Fadenkreuz der Mächte [In the crosshairs of the Powers] (1994), Schlaglichter der Weltpolitik [Highlights of International Politics] (1995), Das Schlachtfeld der Zukunft [The Battlefield of the Future] (1996), Lügen im Heiligen Land [Lies in the Holy Land] (1998), Allahs Schatten über Atatürk [Allah’s Shadow Over Atatürk] (1999). His 2001 book, Afrikanische Totenklage [African Dirge], was on the Spiegel bestseller list from 2001 to 2004.

Despite his high age, he continues writing and traveling the world. In 2008 he visited East-Timor, the only country on the planet he hadn’t visited before. In the years after 9/11 he published at least one book annually, all of them bestsellers. According to Scholl-Latour, he is the best selling non-fiction author in Germany for the last 25 years.

In 2006 he authored the TV documentary “Russia Surrounded: Putin’s Empire faces NATO, China and Islam”. He also supports the conservative newspaper Junge Freiheit, for which he regularly gives interviews.

Scholl-Latour has both the French and German nationalities, and describes himself as Gaullist.

* Peter Scholl-Latour ranks at No. 147 on the Unsere Besten list of all-time greatest Germans. 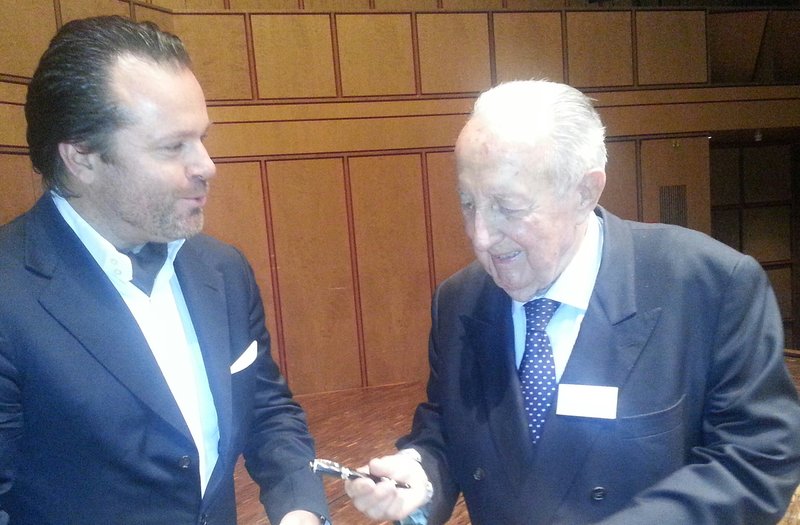 To have met this great personality twice, in 2012 and 2013, is one of the great fortunes in my life.